You are at:Home»Disney Auditions»Walt Disney Pictures Captain Nemo: 20,000 Leagues Under The Sea casting information
*** This project had been put on hold indefinitely *** 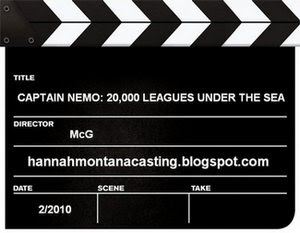 The upcoming Disney feature film “Captain Nemo: 20,000 Leagues Under The Sea” is now in pre-production. The film will be directed by McG (Charlie’s Angels: Full Throttle, We Are Marshall, Terminator Salvation) and will begin principal photography in February, 2010. Filming locations will be in Los Angeles, Hawaii, and Baja Mexico.

This is a high budget action-adventure based on the 1954 film “20,000 Leagues Under the Sea,” which was an adaptation of Jules Verne’s classic novel.

The story begins with the mystery of an underwater “beast” that has been stalking boats, taking bites out of them, and leaving them to sink to the bottom of the sea. Ned, is reluctantly recruited by an old army buddy to hunt the beast. He’s joined by Aronnax, a scientist and Julie. They go out looking for this beast and eventually find it. But the beast is not a beast at all…it’s a super tricked out mega submarine called “The Nautilus,” captained by Nemo, who takes them captive and brings them back to a secret Volcano City. There they learn that Nemo is searching for a lost underwater civilization that holds libraries of vast knowledge and a weapon with the power to destroy mankind.