You are at:Home»Disney Auditions»Marvel Studios to shoot ‘Ant-Man’ beginning January, 2013 in London 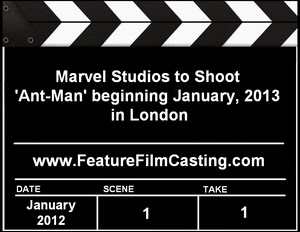 Arad Productions in association with Big Talk Productions are in the pre-production stages of the highly anticipated Marvel Studios action adventure sci-fi thriller feature film “Ant-Man”. Walt Disney Studios, the parent company of Marvel Enterprises, announced that the film has been greenlit. Filming is scheduled to start this January, 2012 for a November 6, 2015 release date. People’s Choice Award winning Canadian actor Nathan Fillion has been mentioned for the lead role of Hank Pym, also known as Ant Man. However, Fillion stated at the 2012 Hero Complex Film Fest, “did you ever just love Ant-Man? Not me”. Therefore is seems highly unlikely that the studio would pursue Pym after making a comment like that. The project will shoot at Pinewood Studios in England, and other locations around London and the United Kingdom.

“Ant-Man” centers on Biophysicist Dr. Henry “Hank” Pym, who becomes a superhero after discovering a chemical substance that allows him to change his size. Armed with a helmet and suit that could control ants, Pym would shrink down to the size of an insect to become the mystery-solving Ant-Man. Scott Lang became Pym’s successor after stealing Ant-Man suit to save his daughter Cassie from a heart condition. At one point the film adaptation was said to involve both Pym and Lang, however this is to be seen after the film comes out in theaters.

Three-time British Academy of Film and Television Arts BAFTA Award nominated English filmmaker Edgar Wright will direct “Ant-Man” from an adapted screenplay written by himself and BAFTA Award nominee Joe Cornish. Wright has been working on the script for over 6 years, with a third draft given to Marvel in June, 2011. The studio officially presented the character Ant Man with an entertaining and riveting test video at Comic-Con 2012. Ant Man had very unique abilities where he transforms instantly from full size to tiny size and and vice versa. He is also portrayed as a trained operative.

Minors and foreign talent must be legally eligible to work in the United Kingdom.

The following information and documents may be needed for adults, minors, and foreign talent who would like to work as an actor or extra on film and television productions the United Kingdom:

In addition to the following London Actors Resources:

Extras casting will not begin until filming commences in January, 2013.

Starring: To Be Cast

Biochemist Dr. Henry “Hank” Pym uses his latest discovery, a group of subatomic particles, to create a size-altering formula. Though his first self-test goes awry, he develops an instrument that helps him communicate with and control insects.