Casting has been completed on this project. 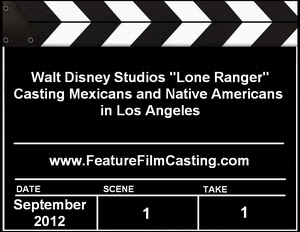 Note:  The scene shooting September 28th has been POSTPONED until March of 2013.

The Walt Disney Studios Motion Pictures action Western film “Lone Ranger” is now filming in the Los Angeles area, after completing principal photography in New Mexico, Colorado, and Utah. The extras casting director is seeking Mexican and Native American Women, Children, and elderly Men to work on the film as fully paid featured background performers. The scenes to be filmed will recreate an 1800’s Comanche village. Also needed are elderly Caucasian men and women who have a natural period look, and can portray 75 years of age and older. The exact shooting dates have not been determined yet, but are highly likely to be in late September, 2012.

“Lone Ranger” is a thrilling adventure infused with action and humor, in which the famed masked hero is brought to life through new eyes. Native American spirit warrior Tonto recounts the untold tales that transformed John Reid, a man of the law, into a legend of justice. The film will take the audience on a runaway train of epic surprises and humorous friction as the two unlikely heroes must learn to work together and fight against greed and corruption. Johnny Depp has described the film as an update on the television series, with the screenplay focused more on him as the sidekick Tonto. Depp has stated that Tonto’s role will challenge ideas about Native Americans that were portrayed in the original television series.

Gore Verbinski, who is best known for directing Johnny Depp in the first three Disney “Pirates of the Caribbean” films, is again directing Depp in “The Lone Ranger” from an adapted screenplay written by Justin Haythe, Ted Elliott, and Terry Rossio. Verbinski’s Blind Wink Productions has been brought on board as one of the production companies and Classic Media will distribute “Lone Ranger” overseas. Jerry Bruckheimer, who has won 7 Primetime Emmy Awards and is currently on the National Board of Directors of the Producers Guild of America, is producing “The Lone Ranger”. Chad Oman and Mike Stenson will executive produce for Jerry Bruckheimer Films, along with Eric McCleod.

The extras casting director in Los Angeles is seeking Women, Children, and elderly Men of Mexican or Native American heritage to recreate a Comanche village scene in the 1800’s. This is for featured extra work, and talent can be either union or non-union. No prior experience working as an extra is required. Because this is a period piece, you must fit into the following:

• Mexican or Native American Children.
– Any age.
– Must be able to portray 1800’s period look.

Also needed are the following:

• Caucasian Men and Women.
– 75 years of age and older.
– Must have a natural period look.

If you fit the description and are located near Los Angeles, you can submit via email ASAP. Send a recent color snapshot, clear and in focus, no one else in the photo, along with location, age, all contact information including phone number(s), and state whether you are union or non-union. Email to the following:

Put “Sybil Golin” in the subject line of your email.

Minors and foreign talent must be legally eligible to work in the state of California and in the United States.

The following information and documents may be needed for adults, minors, and foreign talent who would like to work as an actor or extra on film and television productions in Los Angeles and the United States:

In addition to the following Los Angeles Actors Resources:

Left for dead in an ambush with five other Texas Rangers, lawman John Reid (Armie Hammer) survives and is nursed back to health by an Indian scout named Tonto (Johnny Depp). He then dons a mask to avenge the murders of his comrades and to foil evildoers, never accepting payment for his services. His gratis vigilantism is made possible by the silver mine he inherits from one of his slain brothers – the same mine that affords him his endless supply of trademark silver bullets.