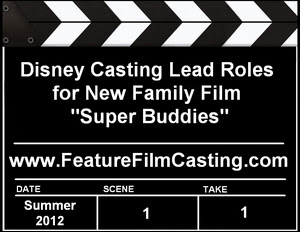 Walt Disney Studios Home Entertainment and Key Pix Productions are set to start filming “Super Buddies”, the 6th installment in the Air Buddies franchise. The casting director is auditioning for both on-camera and voice-over talent. There are roles being cast for boys and girls, adults, and seniors. Shooting will take place in Vancouver, BC from late August through October, 2012. Principal actor roles are being cast in both Los Angeles and Vancouver, while the extras and stand-ins will all be cast in Vancouver.

“Super Buddies” will feature the five puppies’ child owners working together with their canine counterparts to battle against an evil alien from another planet. These roles are an amazing opportunity for child actors to be cast in a Disney movie. Previous installments in this direct-to-DVD series of films are “Air Buddies,” “Snow Buddies,” “Space Buddies,” “Santa Buddies,” “Spooky Buddies,” and “Treasure Buddies”. The Search for Santa Paws is a spin-off of the Air Buddies series and a prequel to Santa Buddies.

Canadian filmmaker Robert Vince will direct “Super Buddies” from a script written by himself and Anna McRoberts. The two have written and produced all six of Disney’s Air Buddies movies. Vince specializes in making films with kids and animals, and has directed all of the “Air Buddies” franchise films, “Santa Pups,” “Santa Paws,” “Chestnut,” and “Spymate” among others. Vince is owner and CEO of Key Pix Productions, which has offices in Malibu and Vancouver, BC. Before Vince launched his directing career, he ran Keystone Entertainment, where he produced, co-wrote and directed more than 33 films, primarily in partnership with Disney and Miramax. Anna McRoberts is president of Key Pix.

Minors and foreign talent must be legally eligible to work in Vancouver, BC and Canada.

The following information and documents may be needed for adults, minors, and foreign talent who would like to work as an actor or extra on film and television productions in Vancouver and Canada:

In addition to the following Vancouver Actors Resources:

When the five puppies stumble upon the Five Power Rings of Inspiron (alien artifacts abandoned on Earth 16 years ago), they all develop super powers, and are enlisted in Captain Canine’s battle against the evil Darkon alien Commander Drex.

Captain Canine is commander of space ship Megasis and is from the planet Inspiron. He is the mortal enemy of the Commander Drex. In charge of protecting Princess Jorala and the Five Power Rings from Drex, Megasis places the rings in hiding on the planet Earth, and takes the form of a German Shepherd, intending to stay on earth in very deep cover.

But when the five Buddies discover the Power Rings and instantly develop superpowers, Captain Canine has to train them very quickly – for Commander Drex is headed back to earth, and this time he’s determined to succeed.