You are at:Home»Disney Auditions»Casting calls underway for Marvel Studios ‘Thor: The Dark World’ 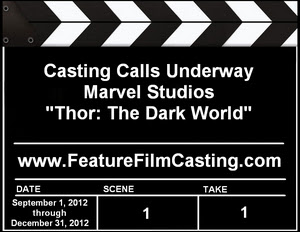 The eighth installment in the Marvel Cinematic Universe – “Thor: The Dark World” – is now in pre-production and the casting directors in Los Angeles and London are auditioning talent for co-starring and supporting roles. The bulk of filming will take place in London, with some additional filming in Los Angeles. Extras, photo-doubles, and stand-ins will be hired in London and various areas of the United Kingdom, as well as in Los Angeles. Filming on “Thor: The Dark World” will run from September 1, 2012 through December 31, 2012.

Primetime Emmy Award winning filmmaker Alan Taylor will direct “Thor 2” from a screenplay written by Robert Rodat, original drafts by Don Payne based on the Marvel Comics by Jack Kirby, Stan Lee, and Larry Lieber. Alan Taylor was hired because of his outstanding directorial work on HBO’s “Game of Thrones”. His other credits include “Sex and the City,” “Lost,” “The Sopranos,” and “Mad Men”. Prior to the studio signing Alan Taylor, Patty Jenkins was set to direct “Thor” but left the project in December 2011, citing “creative differences”.

Marvel Studios Co-Presidents Louis D’Esposito and Kevin Feige will executive produce and produce respectively, along with Marvel Comics President and CEO of Publishing Alan Fine. Kenneth Branagh, who is a five time Academy Award nominee in the categories of acting, directing, and writing, will also produce “Thor 2” along with comic book writer, editor, actor, producer, publisher, television personality, and the former president and chairman of Marvel Comics, the legendary Stan Lee.

Must be generally available between September and December in London and the South East of England. To be considered, please register at the following website:

Minors and foreign talent must be legally eligible to work in the United Kingdom.

The following information and documents may be needed for adults, minors, and foreign talent who would like to work as an actor or extra on film and television productions the United Kingdom:

In addition to the following London Actors Resources:

Please submit photos and resumes by mail only.
No phone calls or personal drop-offs.

Various locations in and around London, England, UK.

The plot will take Thor literally to other worlds. It will primarily be the journey of that character, of he and Jane Foster and how the new dynamic with his father is working out, as well as what are the broader stakes for The Nine Worlds. There are rumors that the plot will include Fire Demons of Musphellheim, and/or Dark Elves of Svartalfheim.