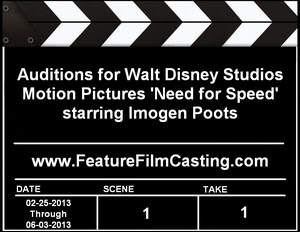 Dreamworks Studios in association with Bandito Brothers are in pre-production on the Walt Disney Studios Motion Pictures racing themed feature film “Need for Speed” based on the Electronic Arts video game franchise which is the most successful racing video game series in the world, and one of the most successful video game franchises of all time. The Disney casting directors are conducting auditions for the films starring and co-starring roles. All of the film’s extras, stand-ins, and photo doubles will be cast in Atlanta, GA where shooting will take place from February 25, 2013 through June 3rd, 2013.

“Need for Speed” tells the story of an underground racecar driver who customizes high-priced cars in the garage he owns in order to make the vehicles fly like all get out on the racetrack. During a race, his best buddy is murdered and he is framed for the crime. After spending time in prison for the crime that he did not commit, he seeks out payback on the person(s) responsible. The story also involves an incredibly gorgeous female who is a cunning exotic car dealer that hooks up the rich with high-end supercars. And then there is Dino, an ex-NASCAR driver who uses his contacts with the rich to develop a business rebuilding and tricking out supercars.

Starring in “Need for Speed” is two-time Primetime Emmy Award nominee Aaron Paul as the racecar driver who is framed for his best friends murder. Paul is best known for his role as Jesse Pinkman in the AMC series Breaking Bad. He was discovered in 1996 at the International Modeling and Talent Association competition in Los Angeles. British actress and model Imogen Poots has been cast in the role of the savvy exotic car dealer. Poots’ star is rising at a breakneck speed, and she has a half dozen films in post-production that she starred or co-starred in. This includes the recently wrapped feature film “A Long Way Down,” in which she starred opposite Aaron Paul. Screen Actors Guild Awards nominee Dominic Cooper will play the role of ex-NASCAR driver Dino.

Filmmaker Scott Waugh will direct from an original screenplay written by George Gatins, who co-wrote the story with his brother John Gatins. Screenwriter George Nolfi was brought in to polish the script. Waugh is co‐founder of the production company Bandito Brothers. He is a great fit for this film as he not only was a highly respected stuntman for over a dozen years, he has worked with NASCAR in the past. Although this is George Gatins first screenplay, his brother’s writing credits include “Coach Carter,” “Real Steel,” “Flight,” and the upcoming “Real Steel 2”.

In addition to writing “Need for Speed” with his brother, John Gatins will also produce. Director Scott Waugh will produce under the banner of his company Bandito Brothers. Patrick O’Brien will co-produce. Mark Sourian, co-president of production for DreamWorks Studios will executive produce. Electronic Arts, the company that developed the video game that the film is based on, will also serve as production company.

Talent must and be legally eligible to work in Atlanta, GA and the United States.

The following information and documents may be needed for adults, minors, and foreign talent who would like to work as an actor or extra on film and television productions in the State of Georgia and the United States:

In addition to the following Atlanta Actors Resources:

Story follows an underground racecar driver (Aaron Paul) who owns a garage that modifies expensive cars to make them faster for racing. Framed and sent to prison when his best friend is murdered during a race, he seeks revenge upon his release. Poots will play a savvy exotic car dealer who connects the wealthy with high-end supercars. Cooper will play the other male lead of Dino, an ex-NASCAR driver who uses his connections to the wealthy to create a business rebuilding and modifying supercars.