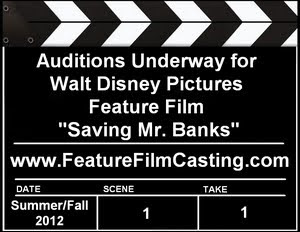 The true story behind the 1964 Walt Disney Productions musical film Mary Poppins is being made into a modern behind-the-scenes movie titled “Saving Mr. Banks”. Walt Disney Pictures will begin shooting September 24, 2012 in Los Angeles. Casting for supporting and day player roles has been ongoing. Extras will be hired in Los Angeles throughout filming, which is taking place from September 20, 2012 through November 27, 2012. Additional filming will take place in Maryborough, Australia.

The main story of this film is of Pamela Lyndon Travers’ childhood, in rural Queensland. Living in a small country town with a depressed mother and an alcoholic father, Pamela used her vivid imagination to create a richer, more welcoming environment for herself. From the characters of her childhood, and the worlds she invented, Pamela eventually created Mary Poppins, a character who has given pleasure to generations of readers and film-goers, adults and children alike.

John Lee Hancock is “Saving Mr. Banks” from a screenplay written by one of the film’s producers, Ian Collie, with rewrites by Kelly Marcel and Sue Smith. Hancock directed the Academy Award winning film “The Blind Side” starring Sandra Bullock, and wrote the screenplay for “Snow White and the Huntsman” starring Kristen Stewart, Chris Hemsworth, and Charlize Theron. He also directed Walt Disney Pictures’ “The Rookie” starring Dennis Quaid.

Minors and foreign talent must be legally eligible to work in the state of California and in the United States, as well as Queensland, Australia.

The following information and documents may be needed for adults, minors, and foreign talent who would like to work as an actor or extra on film and television productions in Los Angeles and the United States:

In addition to the following Los Angeles Actors Resources:

The film centers on the creator of Mary Poppins, P.L. Travers (Emma Thompson). The story shifts back and forth between 1961 and 1907, framing Travers by her childhood in rural Queensland and her experience negotiating with Walt Disney (Tom Hanks) and his team for the film of Mary Poppins. Travers’ father (Colin Farrell) was a banker who slowly slid into alcoholism as the family fell into financial hardship. Travers looked up to her father, and the breaking of his spirit had an effect on her writing. She was extremely reluctant to sell Disney the rights to make Mary Poppins into a movie, mainly because the story was highly personal, and reflected hardships in her own life and her relationship with her father. Although the movie made her a very wealthy woman, she disliked the animated sequences and other aspects of the film so much that she refused to sell any of her other works to Disney for the rest of her life.